In honor of MARCH--WOMEN'S HISTORY MONTH, let me proudly introduce you to a few torchbearers and friends of the WOMEN AIRFORCE SERVICE PILOTS OF WWII. THE WASP. These extraordinary women are serving our country with honor , enthusiasm--and with a passion to 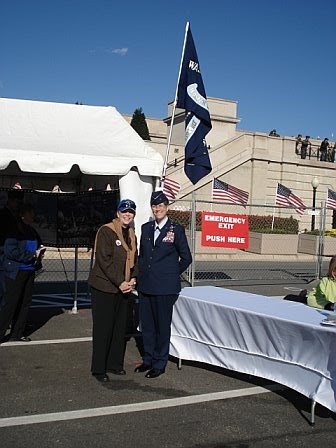 Photo right: General Linda K. McTague and Nancy Parrish in front of Wings Across America's WASP tent in the parking lot of the Pentagon, 2007, at the Air Force Memorial dedication. Gen. McTague was kind enough to 'stand in' for the WASP, remaining at the tent and shaking hands, smiling, and sharing information about the WASP while the WASP were 'up the hill' attending the dedication ceremonies.
As the Director of Wings Across America, I could not be more proud of these patriots, who have served AND ARE serving our country with honor and distinction. THEY ARE the true legacy of the WASP as they continue, not only to tell the story, but to encourage others by living lives of service "above and beyond".
_________________________

is the Commander, 113th Wing, District of Columbia Air National Guard, Andrews Air Force Base, Maryland. She is responsible for over 1200 personnel in support of both F-16 (Air Combat Command) fighter and C-38 and C-40 airlift (Air Mobility Command) aircraft missions. Brigadier General McTague was commissioned through Officer Training School in 1981. She earned both a Master of Science degree in Adult Education in 1980 and a Bachelor of Arts degree in Liberal Arts in 1979 from Florida International University, Miami, Florida. She completed Squadron Officer School, Air Command and Staff College, and Air War College.
Brigadier General McTague is a Command Pilot, with over 5,250 flight hours in T-43, C-22, C-21, CT-39, UV-18, TG-7, T-38, and T-37 aircraft. Upon graduation from pilot training, she was assigned to Detachment 2, 1400th Military Airlift Squadron, Randolph Air Force Base, Texas, as a CT-39 pilot. In 1984, she accepted a special duty assignment to the 94th Airmanship Training Squadron, United States Air Force Academy as a TG-7 instructor pilot. This assignment also led to qualification as an FAA Certified Flight Instructor in the SGS 2-22, 2-25, 2-32, 2-33, 1-26, and 1-34 sailplanes. After two years she moved to Detachment 1 of the 94th ATS to become a pilot for the Wings of Blue Air Force Parachute Team and served as the Operations Officer and flight examiner in the UV-18 aircraft. In December 1988, she joined Detachment 1, DCANG, Andrews Air Force Base, Maryland, as a C-21 pilot. In 1991, she attended Aircraft Munitions and Maintenance Officer School and served as the Assistant Chief of Maintenance and Chief of Maintenance. In 1994, she became the Commander, 113th Logistics Squadron, and subsequently served as the full-time 113th Logistics Group Commander while continuing to fly as an attached C-22 instructor pilot in the 201st Airlift Squadron. She commanded the 201st Airlift Squadron from 1 November 1997, until 22 July 2001, with a special tour of duty in 1999 as the Acting Vice Commander, Air Mobility Operations Control Center, Ramstein Air Base, Germany. From November 2001 until November 2003, she served as the Air National Guard Advisor to the Director of Operations, Air Education and Training Command, Randolph Air Force Base, Texas.

has been shining a light on the WASP as part of the USAF 60th Anniversary celebration. Her kindness and enthusiasm for honoring the WASP has been contagious. She is a true "TORCHBEARER".

General Therianos entered the Air Force in 1980 as a graduate of the U.S. Air Force Academy with a degree in aeronautical engineering. She is a command pilot with experience flying three major weapons systems. She has commanded the 344th Air Refueling Squadron, twice commanded the European Tanker Task Force, and was Commander of the 60th Operations Group. General Therianos has also served as the 60th Aerospace Expeditionary Group Commander in Southwest Asia for Operation Enduring Freedom. Additionally, she has held a variety of staff positions at the Air Staff, Air Combat Command, 15th Air Force and U.S. Transportation Command.

“What makes human beings special is that we can look to future with a vision of where we want to go, but we can also look to our past to find that vision,” said Col. Christina Lafferty, senior Air Force Reserve adviser to the President of National Defense University. “The WASP are an integral part of Air Force history as well as human history. If we forget the tremendous accomplishments of these women, then we will have lost a very special part our past for ourselves and our children.” Col. Christine Lafferty. Col. Lafferty spoke at the ground breaking ceremony at Avenger Field in 2005. She is a wonderful champion for the WASP. Thanks to Col. Lafferty, there were 4 WASP who were invited to the Air Force Memorial Dedication ceremony as special guests of the Air Force. When 14 WASP showed up to attend the event, she not only made sure they were all treated like VIP's, she managed to get every single WASP a priceless VIP ticket to the dedication ceremony.
_____
Now retired from the USAF, Dr. Chris Lafferty is Professor of Behavioral Science, Department of Leadership and Information Strategy, and Director of Research and Writing, Industrial College of the Armed Forces, National Defense University, Washington, D.C. She joined the faculty there in 2004. 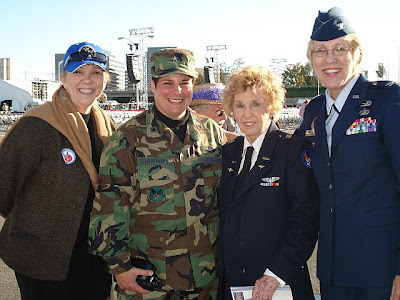 PHOTO: Nancy Parrish, Gen. Janet Therianous, WASP Deanie Parrish, Col. Chris Lafferty.
A commander during both Desert Shield/Storm and Operations Enduring Freedom and Iraqi Freedom, Dr. Lafferty served 28 years in both the active duty Air Force and the Air Force Reserve in public affairs, logistics, policy development and, most recently, as the Senior Are Force Reserve Advisor to the National Defense University President and ICAF professor. Her past assignments include Individual Mobilization Augmentee to the Deputy Assistant Secretary of the Air Force for Reserve Affairs, the Pentagon, and Mission Support Group Commander, 908th Airlift Wing, Maxwell Air Force Base, AL. Dr. Lafferty’s civilian career has included work as an advance practice oncology nurse at Georgetown University Medical Center and Hospice of Northern Virginia. She has taught communications at Ohio University and Arizona State University; lectured at Air University, Howard University and The George Washington University, where she also served as adjunct professor at the Center for the Study of Learning; and worked as a defense analyst.

She is married to Dr. Brad D. Lafferty (USAF, Ret.). She and her therapy dog, Layla, are privileged to represent the Industrial College of the Armed Forces in outreach service at Walter Reed Army Medical Center. 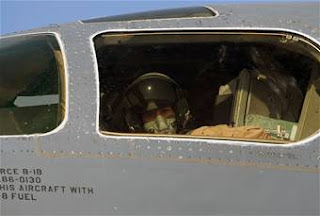 “I have known about the WASP for many years,” said Capt. Crystal Powers, a 9th Bomb Squadron B-1B Lancer pilot. “I have read many books about them and have helped to celebrate their history. I have, along with a lot of my friends, been inspired by what they have done. Unfortunately, we still don’t have a lot of women pilots in the Air Force today, but I hope, in some small way, to continue the traditions of excellence in flying for women today that were created by these outstanding women.”

If you have a quote to share or a WASP you have been inspired by, PLEASE email me.

Posted by buglegirl at 12:33 PM No comments: