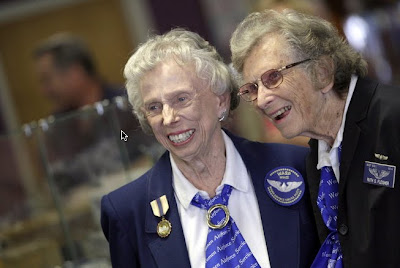 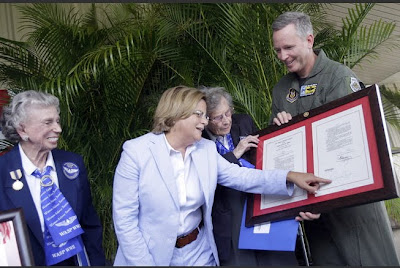 The three former Women Airforce Service Pilots who retired to South Florida were among the more than 1,100 female pilots who logged 60 million miles in non-combat missions between 1942 and 1943. Their primary mission was to protect U.S. coasts, freeing up male pilots to fight combat missions abroad.

After decades of taking a back seat to their true legacy as skilled pilots and gender barrier pioneers, these female pilots finally received the recognition they deserved:

Sargent was joined by Ruth Shafer Fleisher, 87, at Saturday's ceremony at Wings Over Miami Air Museum in which U.S. Rep. Ileana Ros-Lehtinen presented the three South Florida pilots with original copies of the bill honoring the WASPs signed by President Barack Obama this summer.

The third pilot, Helen Wyatt Snapp, 91, was recovering from an illness and did not attend the ceremony.

The women were part of the first group of female pilots ever to fly war planes. Although they flew non-combat missions, their service was deadly: 38 female pilots died while protecting U.S. coasts from enemy invasions.

Yet their patriotic contributions went largely unrecognized for decades. They weren't eligible for U.S. veterans' status until 1977 and they were never awarded full military status.

Only about 300 original WASPs are alive today, most of them well into their 80s.

Ros-Lehtinen, who along with other female lawmakers pushed the legislation forward, said the WASPs now join the ranks of the Navajo Code Talkers and the Tuskegee Airmen, who at the time of their service were discriminanted against because of their race.

``What's most inspiring is knowing that they never did it to break any barriers or change histroy,'' Ros-Lehtinen said. ``They just loved to fly and wanted to do so in defense of our country.''

Sargent and Fleisher didn't just like to fly, they were born to fly.

Fleisher, the daughter of an airplane mechanic who later managed an airport in Rochester, N.Y., started logging flights as early as age 13. She said she flew ``anything she could.''

During her service, Fleisher tested AT-6 warbirds. After the WASPs were disbanded in 1944, she got a commission to join the Air Force as second lieutenant and retired in the Air Force Reserve as a major. She later became one of the first women to work in a control tower at Philadelphia International Airport.

Sargent started piloting in her early 20s in her native Little Rock, Ark., but once she caught the flying bug she didn't stop until well into her 70s.

During the war, Sargent flew along North Carolina's shores, on the lookout for enemy ships, submarines and planes. She later joined the Air Force Reserves and spent 30 years teaching aviation at Miami Dade College.

One of her students, 68-year-old Judy Portnoy, called Sargent ``the most amazing person I know.''

Both Fleisher and Sargent moved to South Florida about four decades ago.

Fleisher manages a three-acre avocado grove in Homestead and Sargent lives in a retirement home in Old Cutler Bay.

They were both married and later widowed. Sargent has three children.

Growing up in a time when jobs for women were often limited to office jobs, nursing and teaching, Fleisher and Sargent are aware they were trailblazers.

``It was hard because people didn't think about women flying,'' said Sargent. ``But we didn't care, we did what we wanted to do.''

Fleisher agreed and said they proved all their doubters wrong.

``We, as some of the first women pilots, proved that we could fly military airplanes and do a good and decent job,'' Fleisher said.

Posted by buglegirl at 10:07 AM No comments:

For Joyce Secciani, who used to dream about flying, it was as if it was in their blood. And being part of the WASP during World War ll was an ideal way for them to do what they loved most. (Laura Embry / Union-Tribune) -

For Vivian Eddy, who used to dream about flying, it was as if it was in their blood. And being part of the WASP during World War ll was an ideal way for them to do what they loved most. (Laura Embry / Union-Tribune)

Vivian Eddy, shown coming out of a Bell P-63 Kingcobra, received an American Campaign Medal, awarded to the WASP in 1977.

At 88, Vivian Eddy still rails loudly about the disbanding of the WASP (Women Airforce Service Pilots). It was a program through which she and more than 1,000 other women made a lasting if little-mentioned mark on World War II and U.S. combat aviation.

“I thought it was the nastiest thing they (Army Air Forces officials) could have done to us,” Eddy says while receiving visitors at her home in Coronado. “They fired us. They gave our jobs to Air Force men who didn't want to go overseas. I would have gone overseas in a minute — I was a (heck of) a good fighter pilot.”

Joyce Secciani, at home in El Cajon, is calmer on the subject. But despite a fading memory, at 87 she still shares Vivian's passion for the WASP and her disappointment with its demise. She, like Vivian, was one of the 1,102 women who flew in the all-volunteer program between 1942 and 1944.

“All of us felt bad to lose (our flying jobs) — all of us wanted to keep up our ability to fly,” Secciani says. Because they knew that with prevailing chauvinistic attitudes, there would be no pilots' work for them in the civilian realm.

But a small triumph has been wrought for the legacy of the WASP. Last month, , President Barack Obama signed into law a bill that awards the Congressional Gold Medal to Women Airforce Service Pilots.

The award — Congress' highest civilian honor — recognizes the women's contributions during the war, and a Capitol celebration, including individual medal presentations to surviving WASPs, is being planned.

Author Amy Goodpaster Strebe, who has become almost obsessed with getting WASP pilots a fair representation in history, is visiting and talking up the award with Eddy and Secciani.

Goodpaster Strebe, a native San Diegan, became an avid supporter while doing her research a couple of years ago on her recently published book — “Flying For Her Country” — which reports the history of the WASP program.

The pilots, she says, were much more than the first women to fly American military aircraft. They did everything their male counterparts did except fly in combat.

They risked their lives, some — 38 of them — even gave them up. And in the end, amid a lot of politics, they were unceremoniously dismissed and kept a secret in classified archival files for more than 35 years.

Goodpaster Strebe joined with support organizations, such as Texas-based Wings Across America*, which is dedicated to preserving the WASP legacy and spearheaded a national campaign that led to the congressional medal.

She has met and talked with dozens of surviving WASP members around the country.

“Knowing what I now know about the WASP and meeting them,” she says, “made me want to get the word out about them.”

But now she sits near a table, gripped by Secciani's calm recounting of walking away from a fiery crash landing in her hometown of El Centro nearly 70 years ago.

“The ship skidded on the runway and the engine started sputtering,” Secciani says. “I was anxious when I saw the plane catching on fire, but I'd always had faith in planes and the guys who were taking care of them. So I always felt confident that I was going to get out safely.

“I loved flying,” she adds. “I used to dream of just stretching my arms out and flying.”

She says that love and fearlessness made her sign up without hesitation for the WASP when she heard about the program in January 1943.

“We all just wanted to fly,” she says wistfully.

Eddy recalls that she was two WASP classes behind Secciani and they didn't meet until six years ago, when they got together to compare pictures and other memorabilia.

Eddy agrees eagerly that all the WASP pilots wanted to do was fly — “not so much prove anything to anybody, but just fly.”

“When I was in fourth grade, my granddad took me to an air show and I saw women flying in the show — that got me hooked.”

Eddy was a WASP ferry pilot, who crisscrossed the country at least nine times, flying fighter planes from their manufacturers in Los Angeles to air bases in Newark, N.J., and Great Falls, Mont.

“I could fly any plane the (Air Force) had,” she says, before noting that after the war, the closest to a professional flying job she could get was as a stewardess with one of the major carriers.

“They knew I could fly their planes,” she says. “But they wouldn't let me, because they said it wasn't right for women to fly (professionally). Isn't that terrible?”

Shortly before her visit ends, Goodpaster Strebe notes that researchers figure there are only maybe about 300 WASP survivors left and it will be most appropriate for them to get the congressional medal and the recognition after so long.

Says Eddy, softening: “It's nice to finally be recognized — it's never too late.”

Posted by buglegirl at 9:40 AM No comments: