By Special to The Oregonian 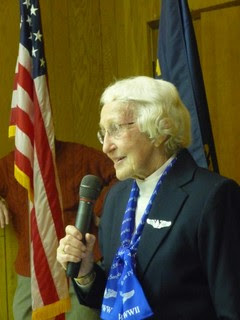 View full sizeJanet GoetzeJeannette Goodrum of Lake Oswego thanks Sen. Ron Wyden, D-Ore., and people at the King City Town Hall for honoring her World War II achievements as a member of the Women Airforce Service Pilots, called WASP. She plans to join other WASP to receive a Congressional Gold Medal, the highest civilian honor, in a Washington, D.C., ceremony tentatively set for March.Jeannette Gagnon Goodrum of Lake Oswego learned during World War II to land planes on skis in the New Hampshire snow as a member of the pioneering Women Airforce Service Pilots.

The 89-year-old Massachusetts native was among the 1,074 women who became the first to fly U.S. military planes. At the time, some questioned whether women were capable of doing the job. They received no military benefits nor honors until 1977, when their records of service were unsealed and they gained full military status.

They have gained additional recognition since then, including the Congressional Gold Medal, the nation's highest civilian award, bestowed in early 2009. However, the medals of the approximately 300 surviving pilots each will receive are still at the United States Mint, Sen. Ron Wyden, D-Or., said earlier this week.

For that reason, he has been honoring each of the seven surviving WASP known in Oregon as he attends meetings near their homes. Goodrum's turn came this week at a Town Hall meeting in King City, where Wyden presented her with a framed copy of the bill authorizing the Gold Medal and a flag that has flown over the Capitol.

"We know you flew many of the same missions as the men, but you didn't get the recognition at the time," Wyden said to Goodrum. Now, the trailblazing WASP accomplishments can inspire young women, including his 2-year-old daughter, to great achievements, he said.

Goodrum thanked Wyden and the people filling the King City Club House meeting room, who loudly applauded the former teacher and school administrator, who raised four children after her days in the cockpit.

Another WASP, Anna Flynn Monkiewicz, 90, of The Dalles, said renewed interest in the pilots has surprised her. However, she noted, the Tuskegee Airmen, the first African American military airmen, and the Navajo code talkers, whose wartime communication was based on their ancient language, also have been recognized in recent years.

"I guess it's our turn," said Monkiewicz, who flew small fighter planes. Goodrum flew a lot of twin-engine aircraft.

In addition to Goodrum and Monkiewicz, according to Wyden's office, Oregon's surviving WASP include Madelon Burcham Hill of Bend; Catherine Murphy of Jacksonville; Elinor Fairchild Stebbins of Portland; Shirley Haugan Wunsch of Manzanita and Kay Chaffey of Medford.

Both Goodrum and Monkiewicz said they plan to attend a Washington, D.C., ceremony to receive their Congressional Gold Medals, tentatively set for March.

-- Janet Goetze
Posted by buglegirl at 7:55 PM No comments: