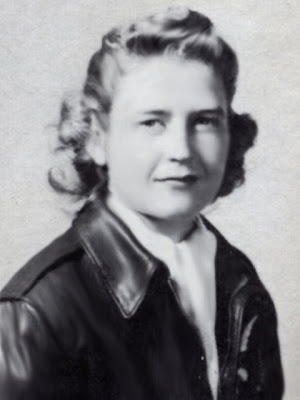 Anchorage Daily News
FAIRBANKS -- Pioneer conservationist Virginia "Ginny" Wood, 92, of Fairbanks has been awarded the Service Citizens Award by the U.S. Fish & Wildlife Service.
The ceremony, with more than a dozen friends and family members present, took place in a hand-hewn log cabin that Wood built in the 1950s.
Wood, a warplane ferry pilot during World War II, (WASP) arrived in Alaska in 1947. She started the renowned Camp Denali at Denali National Park and has mentored countless young conservationists.
"Ginny Wood has left her mark on the landscape of Alaska and made an indelible impression on Alaska's conservation community," said Fish and Wildlife Service Acting Director Rowan Gould. "Because of her remarkable foresight, some of Alaska's most treasured places remain untrammeled and are enjoyed by people from throughout the world."
Wood and Celia Hunter, her longtime companion, met as World War II pilots and were later dubbed the "grand dames of the environmental movement'' by former Gov. Jay Hammond. Hunter died in 2001.
Wood lobbied the Eisenhower administration to set aside what became the Arctic National Wildlife Refuge, co-founding the Alaska Conservation Society in the process.
In addition, Wood led opponents of the Rampart Dam, which would have flooded the entire Yukon Flats, in the 1960s. She was also an active opponent of the Project Chariot proposal, which would have used nuclear explosives to blast a harbor in Northwest Alaska.
Read more: http://www.adn.com/2010/08/12/1407775/feds-honor-conservationist-wood.html#ixzz0wVROgAws
reposted 8/13/2010
Posted by buglegirl at 12:09 PM No comments:

By Gaile Robinson
grobinson@star-telegram.com
Most Americans know about Amelia Earhart and that Sally Ride was the first female U.S. astronaut to enter space, but the stories of women who fought incredible prejudices between Earhart's disappearance in 1937 and Ride's re-entry in 1983 are lost in the murk of forgotten history.

There were scores of female aviators who fought long, difficult battles to be accorded the same joy, privilege and excitement that men had been given when they were granted wings.

The Women's Museum in Dallas has mounted an exhibition, "Dreams of Flight: A Journey Through Air and Space," through Oct. 31, that highlights the glorious achievements of the first female aviators and follows the path they cleared for the eventual inclusion of women in the space program.

There are more than 40 stories of the contributions women made in the fields of science, technology, engineering and math -- it's not just about the thrills of soaring above the Earth. The show is orchestrated to appeal to young women who might benefit from knowing the heroics of these pioneers. And even though Earhart's legacy has been the dominant story of female fliers for almost 75 years -- she was the first woman to make a nonstop trans-Atlantic flight and became so popular she had a line of women's wear named after her -- she is given no more wall space than Jacqueline Cochran, who led the WASPs during World War II, or Jeana Yeager, a Fort Worth native who circumnavigated the globe nonstop with a partner without refueling.

These are the surprises that the wall texts have in store. They are the reward to the visitor for reading the details. But there is a meagerness to the exhibit that is unavoidable. Few objects have been saved from the days of these sky pioneers, as it was a male-dominated industry, and only a bit remains from recent years.

The lack of latter-day ephemera is a good sign, says curator Nicole Gilbert, the museum's registrar and exhibitions director. Now that women are no longer considered oddities in the field, there is less reason to save their flight suits and helmets or single them out for attention.

These recent achievements, however, will not soothe the feminist's fire at reading the text panel about Bessie Coleman, the first licensed African-American woman pilot. In 1920, Coleman was denied admittance to every flight school in the U.S., and no American pilot would train her. Coleman had to go to France to find an aviation school that would admit an African-American woman.

That incendiary outrage of injustice is aroused time and again, such as when the WASPs were disbanded in 1944 because male pilots complained that they were losing work to women. And again in 1962, when John Glenn, the first astronaut to orbit the Earth, testified about the suitability of female astronauts to a 1962 congressional panel, and said, "Men go off and fight the wars and fly airplanes."

NASA's 13 female astronauts at that time, who had passed the first rigorous round of testing, were sent home. NASA cited their lack of military jet experience (despite the fact that women weren't allowed to fly military jets) and that none of the candidates had an engineering degree. Female astronaut hopefuls were not invited back to NASA for 16 years.

Read more: http://www.star-telegram.com/2010/08/04/2384142/womens-museum-exhibit-lets-history.html#ixzz0w85xMBcG
Why is the dramatic life story of Cochran so unknown to many? She was born in poverty and learned to fly so she could better service her cosmetics company. She eventually rose to become director of the Women Airforce Service Pilots. She was the first woman to break the sound barrier and during her life had more speed records than any other pilot. Who knew?

The facts are simply stated on the walls; there is no feminist agenda at work, and there is no rancor in the voices of the aviators who speak on videotape. The young women for whom this show is cast may not even notice the gender inequities of the past. It's certainly not the focus of the show -- the triumphs are -- but is it difficult to see the joys of air speed on the third floor of the 100-year-old Fair Park building. The inspirations and exaltations are moored to the narratives on the walls.
What can be displayed are the flight suits that get uglier with each successive decade. Harriet Quimby's is the best -- her ankle-length burgundy satin coat accessorized with goggles, gauntlet gloves, ivory silk scarf and pearls from 1912 is light-years more attractive than the serviceable blue jumpsuit worn by Yeager in 1986. The fashions of the aviatrix will not sell the dream.

There are a few interactive displays, and one is quite charming. Nancy Parrish, the daughter of one of the early WASPs, Deanie Bishop Parrish, took her mother's photographs of her early life and WASP training in Sweetwater and turned it into a digitized scrapbook. Photos of the trainees being hauled around in a former cattle truck and doing their morning calisthenics on the parched landscape of West Texas make the experience look harsh and formidable, but Parrish's enthusiastic comments and joy for learning to fly completely negate the lack of amenities at the flight school. The scrapbook can be viewed on a screen in the gallery or you can see it at home. *Visit www.yudu.com and in the search box type "WASP World War II scrapbook." Parrish's scrapbook is one of several options presented.

Also on display is a tube that approximates the size of Yeager's fuselage. This is the young woman from Fort Worth who set the record for the first around-the-world flight without needing to refuel in 1986. The plane carried two very cramped passengers and 1,200 gallons of fuel. What's on view is only a large pipe with a small chair inside to replicate the confined cockpit of her plane Voyager; it's no more sophisticated than a fort made of sofa cushions.
To appreciate this exhibit, you will have to take the time to read the wall texts -- and then it is not the exhibit that impresses, but the realization of ignorance.