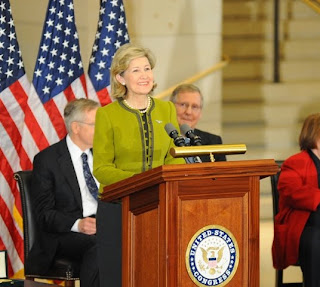 This March, as our nation celebrates Women’s History Month, a special group of women gathered in Washington, filling the massive Emancipation Hall of the new Capitol Visitors Center to receive long overdue recognition for their pioneering service to our nation during World War II. These inspiring heroines were the first women to fly military aircraft and blazed a trail in the sky that opened the door for today’s women military pilots. In a moving ceremony, the 300 surviving members of the WASP received the highest civilian honor Congress can give – the Congressional Gold Medal – in front of the largest crowd to ever attend an event inside the Capitol.

These exceptional women did not receive the recognition they deserved during World War II and not even for decades later. But on this beautiful day in our nation’s capital, in front of their families, members of Congress and the servicemen and women who have followed in their patriotic footsteps, they finally heard the words they have waited so long to hear: “On behalf of a grateful nation, thank you for your service.”

All these women volunteered to serve their country in wartime. They paid their own way to Texas, where they trained at Avenger Field in Sweetwater. When the war ended and the WASP program was unceremoniously ended, they had to pay their own way back home. Of the more than 1000 WASP, 38 were killed in the line of duty. They were not allowed to have the American flag draped on their coffins. Their families had to pay for all their burial expenses and the WASP would often have to take up collections from among their own ranks to help the families of their fallen comrades pay for transporting them home.

The women were recruited to fly non-combat missions to free male pilots for combat. Throughout World War II, these courageous women flew more than 60 million miles, in every type of aircraft and on every type of mission flown by male pilots, except direct combat missions. The WASP flight-tested bombers and fighters; ferried equipment and personnel; flew radar tracking missions; trained male cadets; and towed targets - freeing male pilots for combat deployment overseas.

The WASP pilots were never commissioned; they were never afforded active duty status; and they were not granted veteran status until 1977—more than 30 years after they had served this nation. Despite their patriotic impact, the WASP were never formally recognized by Congress for their wartime military service—until now.

To right this wrong and to acknowledge our nation’s debt to these great women patriots, I introduced legislation to honor the WASP with the Congressional Gold Medal and the bill passed Congress in record time.

I wrote about the WASP in my book, American Heroines: The Spirited Women Who Shaped Our Country. Thanks to the fearlessness of the WASP, women today serve as pilots in every branch of the military and fly every type of aircraft, from combat fighter aircraft to the space shuttle.

The Congressional Gold Medal was our nation’s ‘Thank You’ to these members of the “Greatest Generation” who answered the call of duty when their country needed them. Just as the Tuskegee Airmen and the Navajo Code Talkers had to wait years to receive the recognition of their service to our nation, the WASP will now be remembered by generations to come for the tremendous contribution they made to America’s victory in World War II.
Posted by buglegirl at 3:28 PM No comments:

“The greatest generation that saved democracy and Western civilization was not limited to one gender,” Senator Mikulski said. “The WASP gave all that you could to save the United States of America and the world that was at war. You gave America your lives, your love and your devotion. Today, Congress gives you the Gold.”

The WASP was a pioneering organization of civilian female pilots employed to fly military aircraft under the direction of the United States Army Air Forces during WWII. The Women Airforce Service Pilots paved the way for the armed forces to lift the ban on women attending military flight training in the 1970s, and eventually led to women being fully integrated as pilots in the U.S. military.

WASP women piloted every kind of military aircraft, logging 60 million flight miles in missions across the United States. They were never awarded full military status and were ineligible for officer status. WASP were finally granted veterans’ status in 1977.

“Today, all of America stands in salute to the 1,074 Women Airforce Service Pilots known and lovingly treasured across this country as the WASP. As we gather today, we know your contributions were often unrecognized, your personal service and self sacrifice was unrewarded, and your love of the Airforce and military service was often unrequited and unreturned. We are here today to undo those wrongs - an act that is long overdue.

“The greatest generation that saved democracy and Western civilization was not limited to one gender. You gave all that you could to save the United States of America and the world that was at war. You gave America your lives, your love and your devotion. Today, Congress gives you the Gold.

“The Congressional Gold Medal for the Women Airforce Service Pilots is the highest expression that we can bestow for courage, service, and dedication to our country. You and those WASP who are not here today, those absent friends, deserve this recognition. You served our country during World War II in our country’s time of need. You answered the call of duty and you did it on your own dime.

“I am so very proud to have co sponsored this bill with my dear friend, Senator Kay Bailey Hutchison. This bill is not about partisanship, it is about citizenship. It is not about whether you are from a red state or a blue state. We need to start being the red, white, and blue United States of America.

“WASP were the first women to fly military aircraft. You flew fighters, bombers, cargo and training aircraft. You flew in every type of assignment flown by men except in combat. You also flew in the face of gender bigotry and even gender hostility. Yet true to your calling, you defended America and you became trailblazers and true patriots.

“You flew over 60 million miles, in 12,000 planes, at 120 American bases, and 14 WASP hailed from Maryland. During those times you, like your male counterparts, came in on a wing and a prayer.

“When the war was over you came home. Thirty-eight of you came home in a pine box that your family had to pay for. Many of you had to scrape to pay your own bus fare home. Despite all this, you held your head high because you knew you had flown in the wild blue yonder. Today, because of your valor and trailblazing, women are serving in the United States Airforce and military. Women now serve as fighter pilots, astronauts, helicopter pilots and search and rescue. You created this opportunity.

“So as the Airforce song goes, “off we go into the wild blue yonder and fly high and to the sky,” but instead of giving you the gun, today, we give you the gold!”
# # #
Posted by buglegirl at 3:22 PM No comments: