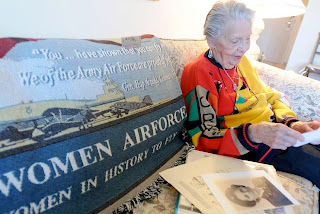 WESTBORO — June E. Bent's cousin happened to owe her some money. He also happened to work at a flight school. So he paid the debt by setting her up with flying lessons.

“They called me the flying secretary,” she said, for she was, at the time, a secretary for a lawyer in her hometown of Des Moines, Iowa.

That was 66 years ago, when it was unusual for a woman to be in the cockpit. But rude comments from doubtful men didn't deter Mrs. Bent or the 1,101 other women who decided to use their piloting skills to help their country win World War II. They became the Women Airforce Service Pilots, women who were trained to fly non-combat missions in 1943 and 1944. They didn't fight, but their work freed male pilots for overseas combat. Thirty-eight WASPs were killed in service.They were underappreciated, overlooked and the first women ever to fly U.S. military aircraft. For that they will receive the Congressional Gold Medal. President Barack Obama signed a bill July 1 that gives each WASP or her family the highest honor a civilian can receive.
“Nobody thought about awards when we were doing this, we just thought about the feeling of being able to fly those great airplanes,” said Mrs. Bent, who lives at The Willows at Westborough, a complex for independent seniors.

But she is proud to receive the much-awaited recognition and talks fondly about the girls she served with.

She was sharp and chatty and wearing a colorful sweater as she turned the pages of a decades-old photo album in her apartment this week.

Black-and-white shots of her from the 1940s show a dark-haired young woman with a defined brow and a big smile. Newspaper clips from the time describe her as one of the “attractive girls” who left home to fly bombers and fighters.

She trained in Sweetwater, Texas, and served for about a year, doing engineering test flights on various planes. When a new aircraft was tested, or an older one had to be checked after repairs, that was a job for the WASPs. They tested the planes to make sure they were safe for male pilots to use in combat.

It was like being a guinea pig, but Mrs. Bent says that was part of the fun.

“You did it every day, like pounding a typewriter,” she said. “You just took your turn and tested the plane. We were always scared before check rides. … But immediately, the adrenaline sets in. So you just do it.”

How female pilots were treated by their male counterparts differed from base to base; it depended on the commanding officer. “Some of them thought women shouldn't be flying, others thought it was fine,” Mrs. Bent said. Sometimes, junior male officers weren't sure whether to salute the women. Sometimes they said unkind things. Mrs. Bent says she was too busy to care.

“We proved women could be taught to fly the same as men,” she said.

Women pilots who served in World War II were considered civilians, even though they had almost the same training as male cadets and served alongside military officers. They didn't get any benefits: if a WASP died in service, her family had to pay to bring her body home. They weren't recognized as veterans until 1977.

“They performed these magnificent things because they were asked to, but they had to do it better, because they had to prove themselves,” said Nancy A. Parrish, whose mother flew twin-engine bombers in World War II. “They really had to prove every time they got into a plane that they could fly it. They proved airplanes don't know the difference between a man and a woman.”

Ms. Parrish, of Waco, Texas, is executive director of Wings Across America, which teaches the history of the WASPs. She spent three years trying to get Congress to notice their accomplishments. With the help of Maj. Nicole Malachowski, a famed fighter pilot in today's Air Force, a bill was passed this year.

The Congressional Gold Medal also has been awarded to two other historically marginalized groups: the Navajo Code Talkers and the Tuskegee Airmen. The WASP medal will be specially designed by the U.S. Mint, and an award ceremony in Washington, D.C., will follow, but a date has not been set. Mrs. Bent is hoping she can attend.

Many women lost their husbands in the war; Mrs. Bent found hers. She was June Braun when she met a fighter pilot who had just returned from combat in North Africa. He was John T. Bent, known to friends as Jack, and he noticed her while she was sitting with a friend at the Air Force base in Merced, Calif.

“He asked, ‘May I sit with you?' He did, and two and a half months later, we were married,” Mrs. Bent said.

They were married at the chapel on base, in their uniforms, in July 1944. “I didn't have any civilian clothes with me,” Mrs. Bent said. So the first thing she did on her honeymoon was buy a purple suit, a matching hat and black suede sandals.

After the war, the couple lived in Kingsport, Tenn., Chicago and Rochester, N.Y. They had two daughters. Mr. Bent worked for Kodak and Mrs. Bent designed jewelry for fun — she was wearing a sparkling mineral cast in silver around her neck this week, a pendant she made herself. Neither of them flew planes again, but they took up gliding as a hobby. And they traveled around the world.

They moved to Massachusetts about six years ago to be close to their daughter, who lives in Hopedale. Mr. Bent died four years ago.

“We didn't have any plans to retire,” Mrs. Bent recalled. “We were having too much fun.”

She has lost many of her pilot friends and looks forward to reunions where she can meet others who lived the life she did. She is one of seven WASPs living in Massachusetts.

There were more than 600 WASPs living across the country in 1998, according to Ms. Parrish, and now the number is half that.

“They're losing a lot of people,” she said. “We are trying really hard to get the medal designed and get that presentation done before we lose any more.”

Contact reporter Priyanka Dayal by e-mail at pdayal@telegram.com.
Posted by buglegirl at 3:22 PM No comments:

Lois Nash is pictured here on an AT-6 airplane in 1943 after her training in Sweetwater, TX.

Lois Nash stands in front a poster of a B-26 airplane which was one of the many planes Nash piloted as a Womens Airforce Service Pilot (WASP) during World War II. She will be receiving a congressional medal for her service.

On a table in Lois Nash’s living room at Lake Keowee in is a brown metal plane, a B-26 plane. It is the only thing, besides a lamp, that sits on the small stand. And in her hands are pictures of the same plane. And two posters stand up on the floor — at least one of them is another B-26.

It’s her favorite plane. But her story doesn’t start with that plane.

Instead, it begins with another aircraft, a Ford tri-motor, a much smaller plane that had three engines and was made of corrugated metal. She was 5.

Nash, her parents and her sister were at place they often went on Sunday afternoons: an airport in Dearborn, Mich., near her hometown of Ferndale. The skies were clear. Planes were taking off and landing like usual. But this day, they did something different.

They went up in one. That was the day she fell in love.

“They were offering a special that day on plane rides,” Nash said. “I can still see the Rogue River, the Detroit River, Dale Department store and looking into Canada. It’s still as clear as can be. That gave me the idea that I wanted to learn how to fly.”

Twelve years later, in the seat of an open-cockpit plane, Nash knew. Flying was her love, and she wasn’t content to just sit in the passenger seat.

As a woman living in the midst of World War II, she never really thought about flying commercially. But she knew she could fly as a hobby, as a private pilot. It would just take a lot of money for lessons.

So she headed to Eastern Michigan University. A degree and a position as a teacher may give her the money she would need to take those lessons. Nash had no idea then that a president and war would give her an opportunity she’d never thought of.

“It was a wonderful opportunity. When I called, it was full of young men already,” Nash said. “Three weeks later, a fella dropped out. So they called me.”

It was a $25 course and a window to her passion. Two years later, Nash received a call from the government. They needed pilots to train the men so they could go overseas and fight. At the time, she said no. She had to finish school. In June, she graduated. By July she was headed on a plane to Sweetwater, Texas.

Some of the pictures she shows off today are of those days. A younger Lois Nash smiles from the photo wearing a “zoot suit.” She and a half-dozen other women are all smiling, wearing belts around the baggy suits to hold them up. The suits were made for the men. But they had to make do. They had a mission to accomplish.

They were there to train men to fly so they could fight in the war.

In the next 18 months, Nash would serve her country while her husband was fighting in North Africa and Italy. All the women at Sweetwater had boyfriends, brothers or husbands in the war effort, Nash said. They all “wanted to do what they could to help.”

“It was the fastest bomber that they had at the time,” Nash said. “They were so maneuverable.”

Nash said she flew every chance she had. She flew pilots in training, equipment and even two wounded soldiers one time. Here, Nash stops to take me on a journey. This is one of the flights that stands out in her mind.

She was flying from Pueblo, Colo., to Tucson, Ariz. The soldiers were in the back of the plane. About 60 minutes in the air, one of the engines quit. Luckily, she was able to turn around and head back to Pueblo. But all the way, the plane was losing altitude.

“I remember looking down at the airport runway and seeing fire trucks, ambulances, and like 100 people. I just made a nice big turn and used most of the runway to land,” Nash said, looking at me and smiling. “That was the first incident we had. At first the men weren’t sure they wanted women pilots. But they soon learned, ‘Hey, these girls can fly.’ ”

And fly they did.

More than 1,000 women trained at Sweetwater — 1,102 to be exact, Nash said. There were 10 classes of women pilots to go through the place. And before their job was done, 38 would be killed during their duty. They didn’t know it then, but they were paving the way for women today to be able to enjoy the same thrill they had in the skies.

Now, 60 years later, there are about 300 of those original “WASPs” left. Nash is one of them. And in January, she and her fellow female pilots will go to Washington, D.C., to receive the highest honor the U.S. Congress can award a civilian — the Congressional Gold Medal.

But for Nash, it wasn’t about medals or rank or even getting paid.

She just wanted to fly and serve her country.

“It was wonderful,” she said. “I loved every minute of it. I couldn’t get enough flying.”

Posted by buglegirl at 2:41 PM No comments: