DORIS TANNER AMONG WASP VETS TO BE RECOGNIZED 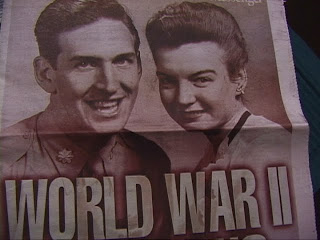 to Honor the WASP at Veterans Day Event in

U.S. Senator Kay Bailey Hutchison, along with the Texas Air Force Association, invite veterans groups and the public to join them this Veterans Day in honoring our state’s veterans and eighteen Texas Women Air Force Service Pilots (WASP) at a ceremony at the Frontiers of Flight Museum at Love Field in Dallas.

At the event, Senator Hutchison will present each WASP with a gold paged copy of the Congressional Gold Medal legislation that she sponsored and the President signed into law in July.

The Senator and Colonel Jacqueline D. Van Ovost, of the 12th Flying Wing Commander at , Air Force Base in , will deliver keynote speeches. The National Anthem and additional music will be provided by the Upper Girls Chorus from the , an internationally known all girls preparatory school in . The Color Guard services will be performed by the “WASP Deanie Parrish” Color Guard from the Texas Christian University Air Force ROTC Program from .

Lunch will be served afterwards for the WASP and their family members. Light refreshments will be available for the public.

Below is a list of the WASP scheduled to attend, along with their hometowns and additional event information.

Posted by buglegirl at 10:06 AM No comments:

On bright, clear afternoons outside her apartment in El Dorado Hills, Doris Locknesssometimes squints up at the sky and wonders: Does she have one more flight left in her?

Probably not, she reluctantly concludes. After all, Lockness is nearing her 100th birthday, and she sold her last airplane a decade ago.

But "oh, what fun I had," Lockness recalls of her pioneering days as a pilot. "It's wonderful to fly."

The recent release of the film "Amelia," in whichHilary Swank portrays aviator Amelia Earhart,has stirred vivid memories in Lockness, who is one of the nation's most accomplished female fliers.

"Amelia was a hero to all of us," Lockness said, "especially to me."

"I was thrilled to represent Amelia," she said, flipping through newspaper clippings about the event. "It was such an honor."

The petite and feisty Lockness has racked up numerous honors for an aviation career that spanned six decades and 10,000 flying hours.

She trained with the Women Airforce Service Pilots during World War II, was the 55th woman in the world to earn a commercial helicopter rating, and got licenses in flying seaplanes, gyroplanes, hot air balloons and gliders.

She has been recognized for her contributions to the public acceptance of women as pilots by Earhart's Ninety-Nines group and has awards from the Whirly Girls helicopter organization, theNational Aeronautic Association and the OX 5 Pioneers, among others.

So vast is her collection of medals, plaques, certificates, commemorative photographs and other memorabilia that she has trouble fitting it all into her small living space. Her name and pictures appear in several historical books, "but I guess I really should write a book of my own," Lockness said with a smile.

Her story began in Pennsylvania and moved to Ohio, where her parents farmed grain and potatoes. During the Great Depression she left the Midwest and traveled with her young husband to California. They were raising a family near a tiny airport in Wilmington when the flying bug bit.

"I would see the little planes take off and land, and think, 'I would like to do that,' " she said. "I had followed Amelia and the old-time fliers, and I thought it would be so great to be up there, so carefree."

After "getting my four kids off to school," Lockness said, she started training. "I was the only woman out there, of course. Cars would line up to watch this crazy woman fly planes."

Lockness obtained her license at age 29 and later joined the WASPs, becoming one of the first women to fly United States military aircraft. The WASPs, who flew domestic missions to free male pilots for overseas duty, disbanded in 1946.

Lockness had found her passion, but her husband did not approve and the couple divorced.

Lockness became a flight instructor and ultimately owned nine planes, including her beloved Vultee-Stinson warbird, the "Swamp Angel," which she piloted around the country.

In her second husband, Robert Lockness, she found a man who shared her love of flying and fast cars. "We would map out a route and just go," she said.

At 99 years old, Doris Lockness still drives a shiny white Jaguar to the market, and is an honorary member of the Sacramento Jaguar Club. She has never had a serious health problem, she said, and her knees are as strong as ever, "probably from pushing rudders for all those years."

Lockness still gets a little giddy when she hears the roar of an airplane or the thumping of a helicopter rotor. "I look up at the sky, and I can't believe I used to do all that," she said.

In February, Lockness will turn 100, and she knows exactly how she wants to celebrate.

Posted by buglegirl at 10:13 AM No comments: