To the ONLINE WASP and FRIENDS:

As the Director and Asso. Director of Wings Across America, we have willingly created the volunteer job of sharing news and information about the WASP online.  It is a privledge. It is also a huge responsibility.  In trying to make sure the WASP are written into our American history, we are also trying very hard to make sure that history is not RE WRITTEN!

The number of email requests for quick quotes has been a little overwhelming at times. Many reporters ask about the facts-- some even send their articles to be checked for accuracy.  Not all do.  We  have also tried to make sure that the true story is always told, no matter who is telling it.

However, sometimes, that is almost impossible.  It certainly is ongoing!

Here are a few RECENT examples:

So, there you have it.  An ongoing battle to fact check and spell check EVERYTHING!  Sometimes we win-- sometimes we don't.  Sometimes we laugh...and other times?  But, we do press on!

Thanks for listening-- and THANK YOU for your support!

GOD BLESS YOU ALL!

Wings Across America -- an all-volunteer project whose  mission is to educate and inspire America with the history of the WASP, first women in history to fly America's military aircraft.  10 years, 115 WASP interviews , 2,000 pages online, the Fly Girls of WWII Traveling WASP Exhibit.  Creating truly outside the box ways to expand the impact of educational information-- one step, one story, one WASP at a time.
Posted by buglegirl at 3:23 PM 1 comment:

"WASP IN THEIR OWN WORDS"

"WASP In Their Own Words, an Illustrated History"

This book is a labor of love, my extraordinary thank you to the WASP -- sharing what I have learned, much of it from WASP interviews with Wings Across America and my work online over the last 14 years.    It is also the most comprehensive, inspirational, ILLUSTRATED history book ever written about the WWII Women Airforce Service Pilots (WASP), the first women in history to fly America's military aircraft.

DETAILS ABOUT THE BOOK: The most compelling parts of "WASP--IN THEIR OWN WORDS" are the quotes from the WASP which are woven throughout the photographs copied from their personal scrapbooks.

This ultimate, illustrated history of the WASP is a graphic-rich journey into the lives of these inspirational, pioneering female pilots. It encompasses experiences from their first flights, to their entering Army Air Force flight training, to their service as military pilots during some of the darkest days of WWII, to their fight for veteran status, and to the passage in 2009 of Public Law 111-40, which acknowledged their overlooked service to their country and awarded them the Congressional Gold Medal.

HATTIESBURG — Jim Bishop was an Army Air Corps pilot when he met the woman who would become his wife of 63 years, Edna "Kitty" Hines.
Like her husband-to-be, Hines also flew military aircraft stateside during World War II, one of only 1,100 women nationwide that graduated into the an elite service known as WASP. 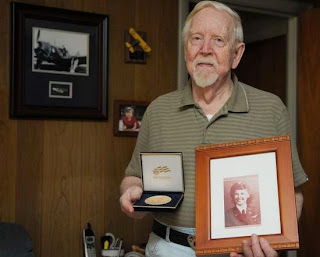 For decades, the Women Airforce Service Pilots were considered a civilian outfit until they were given their due in the late 1970s and officially brought under the military's umbrella.
Earlier this year, to honor the contributions of WASP, the federal government awarded the women the Congressional Gold Medal - the nation's highest civilian honor.
Fewer than 300 WASPs are alive today. Kitty Hines Bishop died in 2007.
But Jim Bishop said he knows what she would have thought about the package that arrived a few weeks ago at the Hattiesburg home they shared.
"She would have been very proud," Bishop said of the large, circular medal on display in a living room already speckled with pictures and other mementos of his wife's days as an aviator.
"And we were proud for her."
During the medal ceremony on Capitol Hill in March for the surviving WASP members, House Speaker Nancy Pelosi told the former pilots they had blazed a trail for other women in the military. 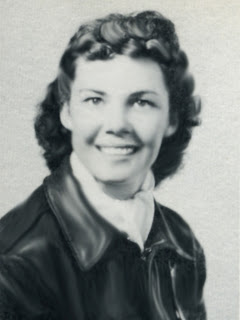 The WASP, which existed from September 1942 through December 1944, was created to free male pilots to fly in the European and Pacific theaters. The women shuttled military personnel from site to site, ferried new aircraft from factories to bases and carried out training missions.
Fewer than 2,000 of the 25,000 women who applied for the Women's Flying Training Detachment were accepted into the program. Fewer than 1,100 graduated into the WASP.
After earning her wings in April 1944, Kitty Hines Bishop was first stationed in Long Beach, Calif., and then after stops around the country, landed at Camp Stewart in Hinesville, Ga., and was stationed at Liberty Field.
"It was a tow-target squadron field," Jim Bishop said. "They flew missions for anti-aircraft training. They flew with targets that came out of the back of B-38s. There'd be about 2,400 feet of cable and in back of that, these great, big, cloth targets. The anti-aircraft folks on the ground would try to hit those targets.
"They also flew night missions for searchlight training."
Though the WASP never flew in combat, 38 women died while flying for the Army Air Corps.
Bishop said while he and his future wife were stationed at Camp Stewart one of the tow planes was hit by anti-aircraft flak during a training run.
"The woman flying it, when she got back down, she went over and chewed them out," he said.
The couple met at Liberty Field. He was a Mississippian, she a native Oklahoman, who grew up in California.
Bishop said Hines logged 200 hours flight time before applying for the WASP. After graduating with the Class of 1943-44 in Sweetwater, Texas, she flew about another 800 hours for the military.
Posted by buglegirl at 11:04 AM No comments: