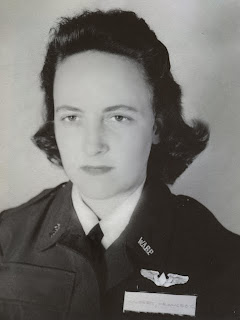 Published: Wednesday, March 17, 2010 1:48 PM PDT
Today’s woman has little difficulty in obtaining pilot’s training, but things were not so easy in the 1930s and ’40s. Women were expected to tend to hearth and home. On the rare occasions that an opportunity to do something different presented itself, women often jumped at the chance.

So it was with Frances Gilbert, later Frances Johannessen. A coed at Texas State University in Austin, she was on her way to music class when she realized that flight training was offered right next door. “I just wanted to fly,” she remembers thinking, “and my music teacher got me to go there.”

Piloting ran in Johannessen’s family; her uncle had been a pilot in World War I.

“He inspired me,” Johannessen says. Her mother also encouraged her, which was not a usual situation. She applied for the Women’s Airforce Service Pilots (WASP) and trained at Avenger Field in Sweetwater, Texas, receiving her wings in March of 1944. She couldn’t fly for long; the group disbanded in December of that year.

Training could be nerve-wracking. At one point her instructor told her to land on a runway that was known to be much shorter than required for the type of plane she was flying. She landed the plane anyway, effectively silencing her instructor — then took off to return the plane to its home airfield.

If she hadn’t been a WASP, she might never have met her husband, John “Norman” Johannessen, who in WWII flew 50 missions over Italy and North Africa in a B-17 bomber. She still has the newspaper clipping of their marriage announcement that was headlined, “Aviatrix marries pilot.” The couple had three children: Jerry Johannessen, a Novato resident for the past 24 years; Bob Johannessen of El Sobrante and Jean Skerlong of Washington state. There are also five grandchildren and a great-grandchild due in mid-summer.

Now 89, Frances resides at Atria Tamalpais Creek in Novato, where she has lived for a year. She learned there would be a Congressional Gold Medal ceremony in Washington, D.C., on March 10, but she didn’t feel up to making the trip. Her son Jerry went instead, and his pride in his mother’s accomplishments is evident. The Congressional Gold Medal is the highest and most distinguished award Congress can award to a civilian.

Two ceremonies took place, one at the U.S. Air Force Memorial in Arlington and one at Emancipation Hall. Dignitaries such as U.S. Air Force Chief of Staff Gen. Norton Schwartz; Brigadier Gen. Wilma Vaught, USAF; aviator and astronaut Col. Eileen Collins, Vice Admiral Vivien Crea, USCG; and Brigadier Gen. Linda McTague, USAF, were among those present. Many of the WASPs now need canes, walkers and oxygen, but each was assigned a female soldier as an escort — a far cry from the nonrecognition given them during the actual war years.

Jerry Johannessen was especially moved by the Air Force flyover during the outdoor ceremony, explaining, “They flew the ‘missing man’ formation.”

While she thinks the recognition ceremonies given for WASPs are lovely, Frances Johannessen said, “I wish you wouldn’t say anything about me in the paper. I didn’t do anything special.”

History of the WASP

In September 1939, England and Germany were already at war, and U.S. President Franklin D. Roosevelt already was ramping up U.S. forces. Jacqueline Cochran, famous for setting speed records aloft, contacted then-first lady Eleanor Roosevelt to suggest that women could fly noncombat stateside military missions, releasing male pilots for combat, should the need arise. The idea had already been discussed in Great Britain, which was suffering heavy losses of planes and pilots. American military leaders weren’t impressed with Cochran’s idea, saying there were too few women available who were already trained as pilots, and there were no facilities for housing and training them.

Cochran’s idea got a hefty boost when the Japanese attacked Pearl Harbor on Dec. 7, 1941. By May of the following year, her idea was under serious consideration through channels that led to Gen. Harold “Hap” Arnold.

Unknown to Cochran and her contacts, a similar effort to recruit women pilots was getting under way. Commercial pilot Nancy Love was also proposing a corps of women pilots. Her proposal went up different channels than Cochran’s, and was approved before Cochran’s plan became public. In July 1943, the two separate organizations merged to become the WASP.

By September of 1943, enemy radar increased the loss of planes and men to an alarming level. Cochran made history again when she arranged for WASP pilots to test the top-secret project developed to confuse enemy radar. Only four people in America knew about this project — two of them the WASP test pilots.

Despite this critical contribution to the war effort, women pilots were not considered part of the military. They received less pay than male pilots. They received no funds to defray expenses, and no benefits for their families. Although 38 WASPs were killed on active duty, they received no honors, not even the honor of having the American flag drape their coffins. Their families paid to have the bodies returned home for burial, and other WASPs often contributed their own funds to make said shipment possible.

Frances Johannessen remembers each WASP was issued a parachute, “but we weren’t instructed how to use them.”

All records of the WASPs were classified and sealed for 35 years, so their contributions to the war effort were little known until the United States Air Force Academy announced in 1977 that it was graduating 10 women pilots from flight training who “would be the first women in history to fly American military aircraft.” WASPs then began a campaign for recognition and setting the record straight. Then-President Jimmy Carter signed a bill granting the WASP corps full military status for its service. In 1984 each WASP was awarded the World War II Victory Medal. The National WASP WWII Museum was founded at Avenger Field in Sweetwater, Texas, where most of the women trained. President Barack Obama signed the order for the Congressional Gold Medal.