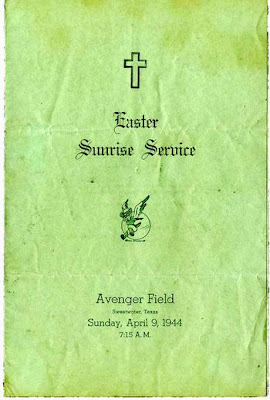 Holidays are tough to celebrate in wartime and Easter Sunday of 1944 was no different.  Most of the trainees were from parts of the country that were now in full bloom with spring flowers and beautiful trees.  In Sweetwater,  Texas, the snowstorms of February had melted and there was a hint of green peeking through the open landscape of West Texas.

The one constant was the wind, which  still blew as the trainees pushed thru to make up for the days playing in the snow, when planes were grounded.   Graduation was around the corner for class 44-W-3.   Temperatures were beginning to register just about perfect, with highs in the mid '70's. 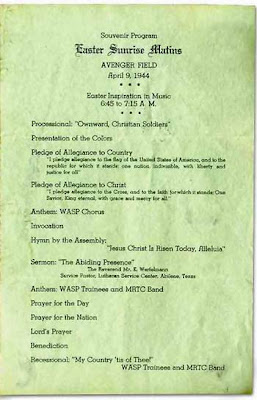 Trainees will observe Easter Sunday with a mass "sunrise service" on the flight line.  The service will begin shortly after 7 o'clock.  Arrangements are being made to broadcast the religious program over station KXOX, Sweetwater.

A large chorus of WASP trainees will sing a number of religious songs.  Ellen Wimberly is directing musical selections and urges all trainees to participate.  Rehearsals began April 4.  The MRTC orchestra from Camp Barkeley will accompany the chorus.

The sunrise service is the first large-scale religious program of its kind conducted at Avenger Field. Mrs. Helen Shaw, Establishment Officer in charge, hopes for 100 percent participation from trainees.

Read more »
Posted by buglegirl at 5:57 PM No comments: