An ABOVE and BEYOND TRIBUTE TO A WASP-- recorded here in a wonderful article by Adam Wallworth.  Link to original article is above.  This act of kindness by Vicki Roberts and the Marion County Heritage Society is worth preserving here in a place where we honor the WASP and their service.  THANK YOU Vicki, for your heart warming tribute to an unsung WASP and thank you, Adam, for your article. 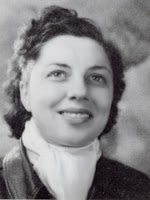 Avanell Pinkley was among the first women to fly military aircraft as part of the Women Airforce Service Pilots in World War II. Her accomplishment was finally honored Thursday, more than 30 years after her death.

Pinkley joined the elite group after graduating from Army flight school in 1943 as part of the service’s second class - the “Singing Second,” Roberts said.

The women flew every type of combat aircraft in noncombat roles, such as ferrying planes from factories to military bases and towing drones and aerial targets. That freed up male pilots for combat service.
Pinkley died destitute in a Harrison nursing home in 1977 at age 64.

Roberts said she didn’t know about Pinkley until being contacted by Wings Across America, a group that is collecting information about the women. She said she immediately began researching Pinkley and working to get a marker placed on her tombstone. 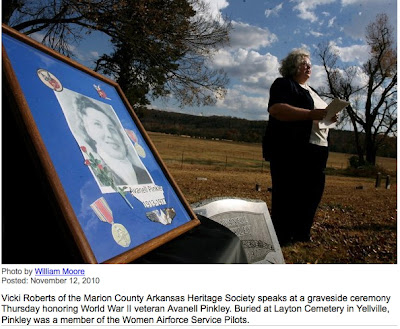 “I was just kind of appalled” that her tombstone had no information on her service to her country, Roberts said at the graveside Thursday.

Roberts enlisted the American Legion Lodge 61 to help, and the group placed a small plaque on Pinkley’s tombstone identifying her as a member of the Women Airforce Service Pilots. The group also took its honor guard to the cemetery to celebrate Pinkley’s service on Veterans Day.

From about 25,000 applicants, Pinkley was one of 1,074 women who made it through the selection and training process to become WASPs. The women also flew some aircraft that their male counterparts thought were unsafe.
The B-26 Martin Marauder, known as the “widow-maker,” was among those that some people thought were too dangerous for women, a fact noted in the act that awarded the women the Congressional Gold Medal, the highest award that can be bestowed upon a civilian.

Congress granted the women veteran status in 1977, some 33 years after the service was disbanded. Together, the women flew more than 60 million miles, and 38 of them were killed.

The group was quietly disbanded Dec. 20, 1944. Records detailing their service were classified until the 1980s and have been omitted in many historical accounts of the war, the act states. 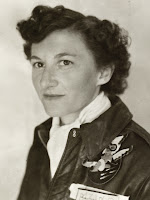 At the time, everyone knew about the WASPs, but recognition wasn’t all that important, said Rae Barnes of Hot Springs.

Barnes is the only remaining WASP in the state, said Nancy Parrish, executive director of Wings Across America.
Parrish started the organization to chronicle the history of the women who served with her mother. She is spearheading an effort to record video interviews with WASP members and recently published a book of interviews with the women.

Roberts said she will continue researching Pinkley’s life and has already added Pinkley’s story to a growing monument of Marion County veterans who are honored in a permanent display at the American Legion hut in Yellville.

Toward the end of the war, the WASPs hoped they would earn the chance to do something else in aviation, butthat didn’t happen, said Helen Rownd of Louisiana. 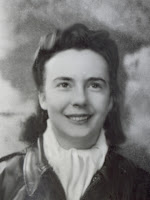 Rownd, who served with Pinkley, said that when the group disbanded, the women were sent home and even had to pay their own way. She said they didn’t get the jobs they hoped for but paved the way for future women pilots.
Civil Air Patrol Capt. Margaret Reger said that while thewomen didn’t see combat, their jobs were dangerous.
Reger said the women flew bullet-riddled aircraft to the “boneyard,” where the planes were retired, and delivered brand-new planes. They also towed targets for new pilots to shoot at, she said.

“They were expendable, but they were glad to be expendable because they were flying,” she said.
Rownd said the women enjoyed the experience while it lasted. As far as towing targets, she said, “as long as you heard rat-a-tat-tat, it was all right.

Reposted from the original article with additional photos from Wings Across America
Posted by buglegirl at 11:27 AM No comments: