Famous pilot tells JU aviation students about her live in the clouds.

Her classroom was a cockpit.

And her co-pilot was a lion.

Much of Janet Lee Simpson's life story sounds like the premise of a dime-store novel. 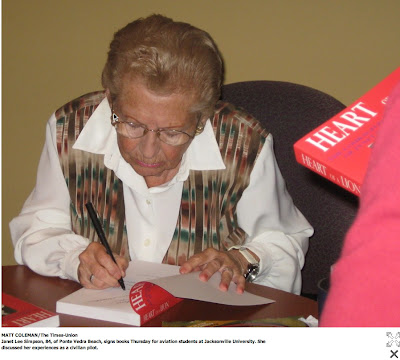 She became a media darling in the early 1930s when she and her sister, Kathryn, flew with her parents, Lt. Col. George R. Hutchinson and his wife, Blanche, to every state on the continent. Their travels and travails were plastered across newspapers nationwide, and she parlayed that fame into multiple radio and Broadway appearances.

She also had an insatiable taste for danger.

Her best childhood pal was a pet lion cub named Governor who never left her side. And she served as a civilian aviator during World War II, delivering much-needed supplies to Allied troops and ferrying aircrafts to combat-tested pilots. (all within the United States)

"Things have slowed down a bit lately," the 84-year-old Ponte Vedra Beach resident said Thursday during a lecture to aviation students at Jacksonville University. "You probably wouldn't want me flying around anymore."

Jill Wagner-Darkatsh, associate director of aeronautics at JU, said aviation is a field grounded in practical experience. And having students hear firsthand from seasoned veterans is invaluable, she said.

"Janet's story is so inspiring for these students," she said. "She overcame so many odds to do what she did."

Most of the snippets Simpson shared about her life focused on her experience as a member of the Women Airforce Service Pilots. The WASPs aided Army pilots on non-combat missions, but she said gaining the approval of their male counterparts was a constant uphill battle.

"They were wary of us at first," she said. "They thought we'd be a liability, but they came around when they saw we could help."

Simpson spent most of her formative years in the sky, but she said she eschewed her father's help and signed up independently for flight lessons when World War II began raging.

She spent a year in service of her country and a couple of years after as a flight instructor. But after decades on the ground, Simpson said she still wishes she was airborne.

Connie Donaldson, an author who wrote a biography called "A Heart of a Lion: The Courageous Journey of Janet Lee Simpson," introduced her subject to the students. She called her one of the most fascinating people she's ever met.

"Janet has enough stories to fill 10 more books," she said.

Simpson said she was glad to impart some of the knowledge she accrued from her years in the sky.

"It's important for them to know where they come from," she said. "It was a lot different when I was flying. We didn't have all these wonderful instruments to help us."

BLUE TEXT--highlighted with clarifications by editor