Edgemont woman among those to be awarded Congressional Gold Medals 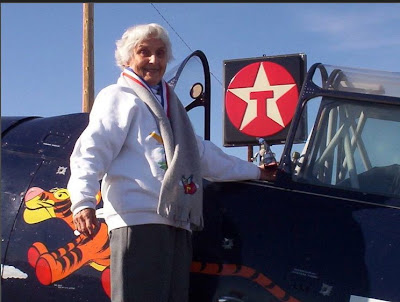 Ola Mildred "Rexy" Rexroat admires an AT-6 owned by Harry Thompson of Brookings. She flew that type of World War II-era plane while in the Women Airforce Service Pilot (WASP) program. She went on to serve as an Air Force reserve officer and air traffic controller. (Photo courtesy Karen Yekel)

An Edgemont resident who served in the Women Airforce Service Pilots during World War II is one of more than 1,000 women who will receive the Congressional Gold Medal. Ola Mildred Rexroat of Edgemont, the last surviving South Dakota WASP, was one of six South Dakotans to serve in the WASPs and, as an Oglala Lakota, is believed to be the only female Native American to have served in the WASPs.

WASPs flew essential non-combat missions so that their male counterparts could be deployed in combat situations. WASPs were required to complete the same primary, basic and advanced training courses as male Army Air Corps pilots, and many went on to specialized flight training. By the conclusion of the war, WASPs logged 60 million miles of flying. During her service, Rexroat towed targets for gunnery students at Eagle Pass Army Air Base in Texas. After the war, she continued her service in the Air Force reserve for nearly 10 years. In a resolution passed by the U.S. Senate on Wednesday, Rexroat will receive the Congressional Gold Medal, given "in honor of outstanding service to the United States." The medal is one of the nation's highest civilian award. "The WASPs served our country with extraordinary bravery, even in the face of discrimination," Sen. John Thune, R-S.D., said in a news release. "Their service was essential to the war effort, and this recognition of their heroics is long overdue." The service of the WASPs did not receive adequate recognition in the years after the war. WASPs were not granted veterans' status until 1977, when President Jimmy Carter signed legislation making the WASPs part of the Air Force. They received no back pay or death insurance, but they finally won recognition. Thune, who co-sponsored the Senate resolution, said that the recognition is much deserved. "Because WASPs' records were classified and archived for over 30 years, they have been left out of much of the documented history of World War II," Thune said in the news release. "This Congressional Gold Medal finally gives these women the honor they deserve."

Posted by buglegirl at 5:04 PM